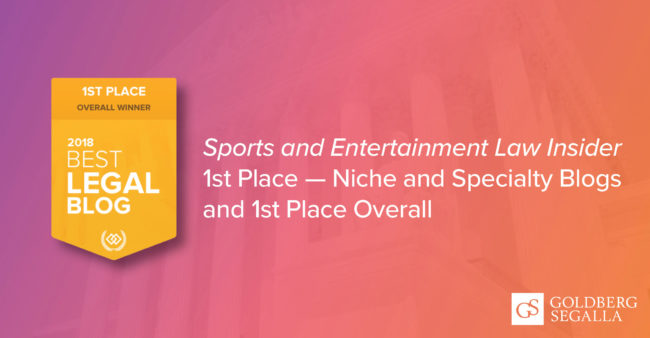 We are pleased to announce that the Sports and Entertainment Law Insider blog has been named the best niche and specialty blog in the country and earned 1st place overall in The Expert Institute’s Best Legal Blog Contest for 2018!

The Expert Institute — a leading legal service provider for identifying, verifying, and retaining expert witnesses — holds this annual contest to vet and recognize the best legal blogs out of the thousands that are on the web. In the 2018 Best Legal Blogs Contest — what the Institute called its “largest and most diverse” yet — four of Goldberg Segalla’s blogs took top-three spots in three categories, niche and specialty, litigation, and legal news.

A huge thank you goes out to all of our readers who made this honor possible. We certainly could not have done it without you and truly appreciate all your support.